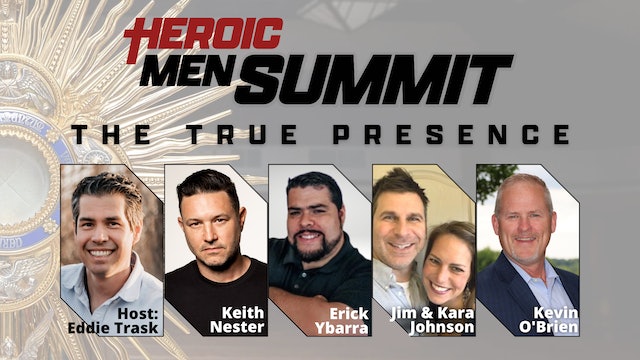 YouTube channel Catholic Re.Con host Eddie Trask interviews converts as they share how the power of the Eucharist led them to Catholicism.

Did you know recent a Pew Research Center survey found that most self-described Catholics don’t believe that Jesus is truly present in the Eucharist? Almost 70% say they personally believe that during Catholic Mass, the bread and wine used in Communion “are symbols of the body and blood of Jesus Christ.” Just one-third of U.S. Catholics (31%) say they believe that “during Mass, the bread and wine actually become the body and blood of Jesus.”

To counter this tragic finding, the Bishops of the United States are calling for a three-year grassroots revival of devotion and belief in the Real Presence of Jesus in the Eucharist. They believe that God wants to see a movement of Catholics across the United States, healed, converted, formed, and unified by an encounter with Jesus in the Eucharist—and sent out in mission “for the life of the world.”

To do our part, we are holding The True Presence Summit for Catholics around the world! Hosting the Heroic Men Summit: The True Presence will be Eddie Trask, host of the YouTube channel Catholic Re.Con. He will interview Catholic converts as they share how the power of the Eucharist led them to Catholicism.

CCC 1324: The Eucharist is "the source and summit of the Christian life."134 "The other sacraments, and indeed all ecclesiastical ministries and works of the apostolate, are bound up with the Eucharist and are oriented toward it. For in the blessed Eucharist is contained the whole spiritual good of the Church, namely Christ himself.

"Whoever eats my flesh and drinks my blood has eternal life, and I will raise him on the last day. For my flesh is true food, and my blood is true drink. Whoever eats my flesh and drinks my blood remains in me and I in him. Just as the living Father sent me and I have life because of the Father, so also the one who feeds on me will have life because of me" - John 6:54-57
St. Alphonsus Liguori: "Do not think that Jesus Christ is forgetful of you, since he has left you, as the greatest memorial and pledge of his love, himself in the Most Holy Sacrament of the Altar."

Pope Francis: "Every time we receive him (Jesus in the Eucarist), he reminds us that we are precious, that we are guests he has invited to his banquet, friends with whom he wants to dine. And not only because he is generous, but because he is truly in love with us. He sees and loves the beauty and goodness that we are."
Our Speakers

Host Eddie Trask is an author, Catholic revert, host of YouTube’s Catholic Re.Con and co-host of the Man Cave Show on Salt and Light Catholic Radio. Eddie is also a product marketer for Augustine Institute's Amen app. Catholic Re.Con. is a weekly show that highlights Catholic reverts and converts as they boldly share their testimonies, defend the teachings of the Church, and expose enemy tactics which keep others from answering the Lord's call.
https://www.youtube.com/c/EddieTrask

Keith Nester is a former pastor/youth pastor with more than 20 years in full-time ministry. Keith served in United Methodist, Assemblies of God, and Evangelical Free churches in various roles.

In 2017, after a 20-year long discernment process, Keith resigned from his full-time ministry position and joined the Catholic Church. In October of 2018, Keith felt the call of God to write a book about what life is like for converts in their first year. The Convert’s Guide to Roman Catholicism: Your First Year in the Church is a down to earth, realistic look at the transitions, obstacles, joys, and challenges converts face in their first year in the Church. Keith hopes this book will help people who are making the transition into the Church to not only survive but thrive in their new home.
As the Executive Director of Down to Earth Ministries, Keith continues to use his preaching gifts to speak to audiences about faith, theology, and his journey to Catholicism. Keith also creates content on YouTube and his Podcast “Catholic Feedback”. In his spare time, Keith loves to ride his Indian motorcycle, and spend time with his family and friends.
Keith and his wife Estelle have 3 adult children and live in Cedar Rapids, Iowa.
https://down2earthministry.org/

Erick Ybarra of Classical Christian Thought (erickybarra.org) is a Catholic apologist, author, debater, and blogger. His most recent books, from 2022, include Melchizedek and the Last Supper: Biblical and Patristic Evidence for the Sacrifice of the Mass AND The Filioque: Revisiting the Doctrinal Debate Between Catholics and Orthodox.
https://erickybarra.org/

Jim and Kara Johnson are Catholic reverts who currently live in Idaho, homeschool their three children, and run a healthcare staffing company. In 2008 they met at a Protestant bible study where Jim was a “lukewarm” Catholic searching for community and passion, while Kara was a deeply devoted “staunch anti-Catholic”, and Bible school graduate, looking for a more authentic faith. They thought they had found that when Jim left the Church and they were married as Protestants. But through a challenging time in their marriage and a beautiful encounter with the Eucharist in 2016 they were both led Home to the Catholic Church- a place Kara said she would never go. Since Jim’s reversion, and Kara’s conversion, Jim has been involved in Cursillo, Knights of Columbus, and several other men’s ministries. Kara is a Catholic author, regular podcast guest, and spiritual director for Made For Greatness. Together, they are committed to bridging the gap between Protestant views and Catholic truths, and love discussing marriage, family, and of course, the story of their conversion, and blessed power of Christ in the Eucharist.

Kevin O'Brien is a former Pro-football player, is co-founder of the Men of Christ, Unite our Nation, and Virtue Baseball. Kevin is an energetic gifted speaker and leader of Catholic ministry to men. Kevin and his wife have seven children ranging in age from 9 to 20.